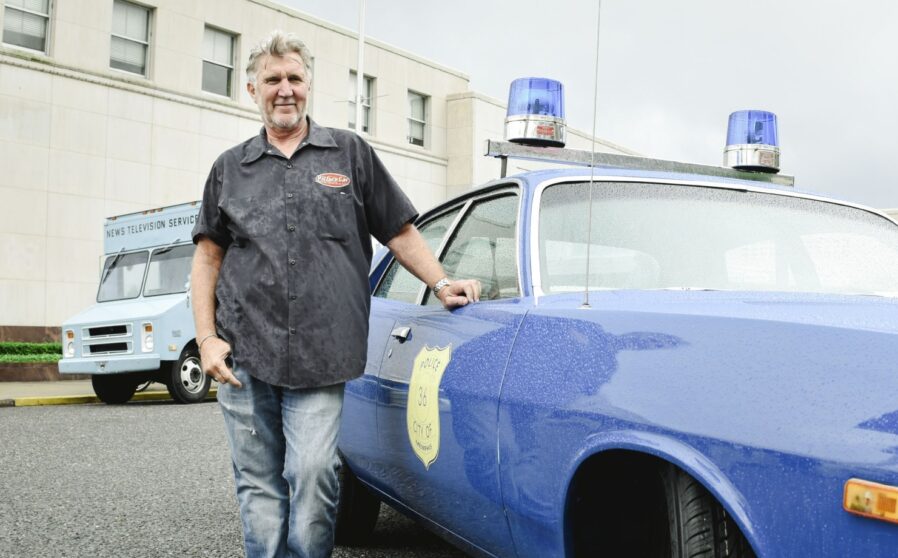 It’s no secret that movies are relying more and more on CGI, but for those who still crave realism in their movies, especially when it comes to car stunts, there’s no substitute for a professional car guy.

This job falls to the Picture Car Coordinator.

In this article from 2015, David Murray interviews our own Ted Moser, CEO of the Picture Car Warehouse.

Computers have made it possible for filmmakers to do the impossible: take audiences into the past, make us eyewitnesses to fantastical events, put us in the middle of situations that we have no business seeing.

No one disputes that – not even Ted Moser, who makes his living providing real cars for live-action stunts and props for movies, TV productions and commercials. Moser, after all, provided vehicles for Into the Storm, the 2014 thriller about storm chasers. It never rained once during the filming. All the weather was provided by computer-generated imagery.

But as for the cars themselves, Moser prefers real wheels – and all the wrenching, welding, painting and repainting they require. Though he happily provided cars for the 2003 CGI-enhanced street racing action film, 2Fast 2Furious, Moser believes the best car movie ever made was Bullitt, filmed in 1968. “No CGI, all raw cameras hanging out of cars, everything’s on the edge,” he says. (How much does he like Bullitt? He named his dog Steve McQueen.)

Moser knows, and his work shows, that there are things that computers aren’t nearly inventive, efficient, culturally literate, passionate – or car-crazy – enough to do.

On location in New Orleans shooting Quarry, the upcoming Cinemax/HBO TV series, Moser uses his fingernails to peel a stubborn decal off a late-1960s taxicab as he describes to ARC the scope and nature of his strange line of work.

Moser provides “picture cars” in whatever numbers, at whatever price, in whatever condition and with whatever modifications a show’s producers require whether they know what they need or not.

He owns 700 cars in a dizzying variety of makes and models, and either brings them to productions he’s working on or rents them out to others via his company, Picture Car Warehouse. You’ve seen many of these cars yourself, in TV shows (like Mad Men), commercials (like the celebrated Autotrader Dukes of Hazzard reunion spot) and films, like All the Pretty Horses, The Town and Little Miss Sunshine.

Remember that scene at the end of the film Argo, where the plane carrying the hostages was trying to escape Iran, and being chased down the runway by police cars and an army truck? Here’s the story…
The truck, a 1962 Mercedes Unimog (see photo, at left), topped out at 45 miles an hour, a rate of speed that Moser, who provided the vehicle for the production – because who doesn’t have a 1962 Mercedes Unimog truck at his elbow? – had been assured would be fast enough for the scene. A week before the scene was to be shot, director Ben Affleck told Moser the truck needed to go 70. After furiously considering and discarding options involving a new engine and new gearing, Moser put the truck’s body on a Ram Charger chassis, completing the job only minutes before the cameras rolled.

What if Moser had blown it, and held up the production?

That’s one of a thousand stories Moser can tell about reinventing sets of wheels on the fly to make cars go the right speed, fit through tight spaces, and perform the required stunts.

But Moser’s most singular contribution starts long before the lights, camera or the action. It starts when he reads the script and begins to imagine the world that his cars will help bring to life, and mentally races through 700 cars of every conceivable type, in infinitely varying and changeable conditions. He needs “hero cars,” which the lead characters will drive, and “nondescript cars,” or “NDs,” to serve as realistic traffic or parked props.

The Quarry script originally specified the makes, models, and colors of the cars in the scenes. Moser asked a production manager whether those orders were literal, or was there some wiggle room for his own creative interpretation. The response: Do as you’re told. Finally, he got a meeting with the two young co-writers/producers and asked them the same question. “Please!” they said, begging him to use his judgment and make the cars fit the place and the time they were trying to create – in this case Memphis, in 1972. “We weren’t alive in 1972,” one of the writers told ARC. “We need Ted’s sensibility because cars are such a part of creating that world.”

And what judgment, what a sensibility Moser has. Among the 75 cars that he had brought from L.A. to the Quarry filming location in New Orleans were some vehicles that didn’t seem to belong. A 1949 Chrysler Royal, for instance. In 1972? “Well, some of the scenes will be shot in a poor neighborhood,” Moser points out, “where lots of the cars would be older.”

Lots of movies get these details wrong. The atmospheric integrity of the recent 2011 movie The Help, Moser believes, was partly spoiled by illogically shiny, brightly-painted cars in a world of dusty gravel roads.

Not that Moser is a historical purist. Not only is he not above choosing or repainting a car to pleasingly match a house it is parked in front of, he considers himself responsible for doing that, too.

It dawns on you early on that, more than most people, Moser is precisely where he belongs in life. And it’s interesting to consider the combination of
destiny and luck that led him to this place.

The son of a gas station owner in Littleton, Colorado, Moser was a born automobile savant. “My mom says that by the time I was three years old, I could name the make and model of every car on the road,” he says.

He played drums in high school and majored in music in college until he got bored during a course about 18th-century music theory. He thought he wanted to be an accountant. He worked for a lawyer and considered becoming one. He skied fanatically and rode horses competitively. But “no matter what, what I did was always about cars.”

Eventually, he found himself owning and operating an auto repair shop near Denver.
He got his first taste of the movie business when the crew of Die Hard II came to Colorado in 1990 to shoot some airport scenes at the old Stapleton Field. Hired as a mechanic for the picture cars, Moser performed well, at one point saving the production from a delay by a small but smart act of civil disobedience.

He loved the experience. He joined the Teamsters, sold his shop, and began rising up the pecking order from picture car mechanic to transportation coordinator. He moved to Los Angeles in 1999.

Even living in the cradle of Hollywood production, Moser had to scramble to find and rent historically appropriate and mechanically sound cars for props and stunts. Meanwhile, he had begun acquiring cars for fun and for pleasure, and when he bought a mess of 25, his wife insisted he find a way to make his hobby pay. So he started Picture Car Warehouse in 2003. Between supplying cars for the productions Moser works on and renting them to other projects, PCW has grown into a 45-employee, $4-million business.

Which comes with serious complications.

On the Quarry set in New Orleans, Moser finds himself fighting the usual battles unique to his business: “I’ve gotta find a bulldozer to crash a car into!”

He’s trying to describe to the executive producer his plan to save some budget money by installing a Lincoln Continental interior into an old Pontiac he had on-hand. The producer is having a hard time getting his mind around that.

In between, Moser is texting and talking – and not always peacefully – with his son and others who are trying to manage the Picture Car Warehouse back in L.A. without his omniscient grasp of the business.
And in the middle of the afternoon, his first grandson is born to his daughter in Texas.

And as if the 61-year-old Moser isn’t spread thin enough, he’s telling a reporter about various business schemes, from sponsorship and promotion ideas to reality TV shows. He has bought the rights to a movie about a legendary 1960s African-American drag racer he got to know in recent years, and he’s looking for a producer. “The movie isn’t about racing,” Moser says. “It’s about race relations.”

Moser struggles to balance his big plans with his bumper-to-bumper schedule. He wants to cut his car collection, which once numbered at 800, down to 400.

“I’ve been trying to get away from cars my whole life,” he says.

Email to a Friend

For security reasons we do not store your password. Your new password will be reset and send on your registered email.