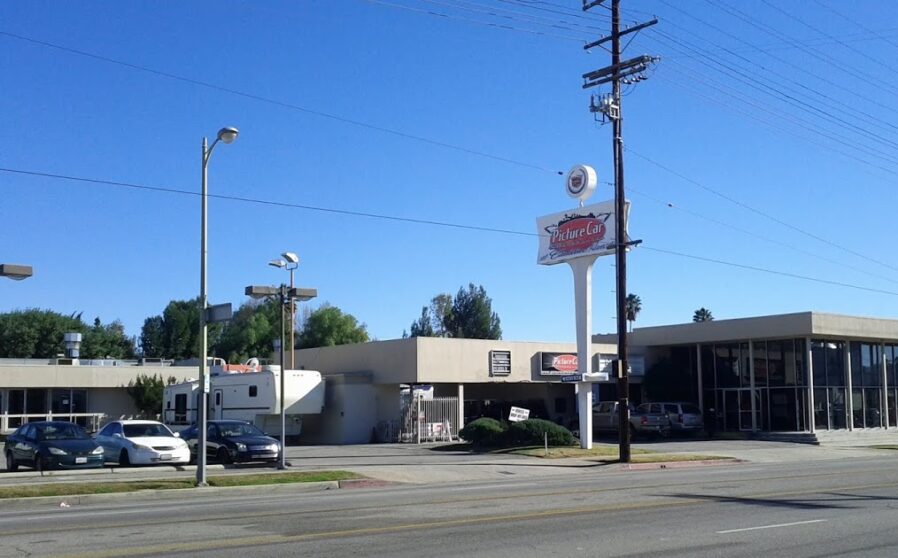 Having moved all its operations to Northridge from downtown Los Angeles, Picture Car Warehouse is all revved up and ready for the cameras.

After five years at L.A. Center Studios, founder and owner Ted Moser relocated his collection of some 700 vehicles to a former Cadillac dealership on Reseda Boulevard where there was more space to store the cars, trucks and motorcycles and for the staff to work their magic on transforming the vehicles for use in television shows, feature films, commercials and still photo shoots.

Within the maintenance bays, vehicles get modified by addition or subtraction. That could be a new color, a different kind of engine, or a second pedal to operate the rear brakes.

“We undo what the computer tries to do,” Moser said.

Recent projects that Moser has supplied vehicles for are “The Lincoln Lawyer,” “The Town,” “The Runaways,” and the upcoming “Fast 5.”

The additional space at the new location opened up opportunities for filming on site. In late March for instance, filming took place for a commercial and Picture Car Warehouse is also where nine episodes of “Car Warriors” were filmed in November for broadcast on the Speed channel. Each episode tracks two teams in a competition to build a car in 72 hours.

The rentals, however, remain the core of the business.

Duke Foster considers what Moser and Picture Car Warehouse offers as indispensable to his position as transportation coordinator for the AMC series “Mad Men.”

Creator Matthew Weiner is a stickler for authenticity and accuracy and Moser meets the challenge even for the vehicle interiors and materials that may not make it on camera, Foster said.

“The Emmys we have won is indicative of the help he has been giving us.” Foster said.

Maybe Moser knows what transportation coordinators need is because he was one once himself. His background in the industry is what makes Picture Car Warehouse different from the few other vehicle vendors located in the Valley.

Ray Claridge was operating an auto repair shop in the mid-1970s when he got into supplying picture cars that grew into Cinema Vehicle Services in North Hollywood, the largest of the vehicle vendors. (GhostLight Industries in the City of San Fernando rounds out the trio of such businesses.)

Moser’s personal collection of 25 cars was the original inventory when he started out in 2002 to compete against Cinema Vehicle Services, which had long been the main provider for film and TV work.

Having been part of a filming crew, Moser took that knowledge and operated his business on the premise that he could prevent costly and time-consuming errors when it came to the vehicles.

Moser also took the wise course of surrounding himself with industry veterans.

Phil Fiori has been around movie making for some 30 years and knew Moser from a project they both worked on. He joined Picture Car Warehouse two and a half years ago and is responsible for commercial work and building up the inventory of third-party vehicles from bicycles to airplanes whose owners will make available for filming.

“If we cannot create the car here we will find it from an outside source,” Fiori said.

That is another way that Moser & Co. proves indispensable to the transportation coordinators like Foster. There is one point person making arrangements with the private owners.

The value is evident when doing a period piece like “Mad Men” because the collectors treat their cars like a baby and are protective, Foster said.

The crew at Picture Car Warehouse treats the vehicles they create and modify like performers because that is what they are to them. These are characters with two or four wheels, a snazzy paint job, and a powerful engine.

“The cars for us are the actors,” said Billy Hammon, a partner with Moser. “They are the soul of everything we do.”

Hammon is another long-time industry veteran, one whose connections helped bring PCW to Northridge. Hammon had worked with the Rydell dealership chain in the past and used that connection to land the deal to take over the former Cadillac store.

Since moving to Northridge, the inventory has proven to be so large that two satellite sites were procured for storage.

Email to a Friend

For security reasons we do not store your password. Your new password will be reset and send on your registered email.